Growth by acquisition has been a viable strategy in the technology service industry for decades, and there are some large “roll-up” plays currently active in the industry.

Growth by internal sales is hard work.  Selling service is harder than it looks.  When you’re selling a product, you’re selling a thing.  It is +85 concrete, real, you can take a picture of it, you can demo it working.

When you’re selling a service, you’re selling a promise.  It’s intangible.  Like beauty, it is in the eye of the beholder.  This requires a much more sophisticated sales model, worked by highly-skilled folks.

A services acquisition involves people (customers & employees).  The retention rate of the revenue of the base acquired is directly proportional to how well the acquired business is integrated.  An acquisition brings in a new culture.  Acquired workforces create horizontal pressure in the organization.

Service organizations are best served with a strategy that blends organic and commodity growth.

Within the last two weeks we’ve heard from a variety of sources on the ongoing real estate/housing market saga.  The Federal Reserve, Harvard University, and Long & Foster, the largest privately-owned real estate company in the U.S., all weighed in on the current state of the market.

“Looking ahead, residential real estate agents expect sales for this year as a whole to be level with last year. An agent who remarked that “we are off the bottom, but it’s going to be a slow comeback” expressed a common opinion.” http://www.federalreserve.gov/fomc/beigebook/2011/20110608/3.htm

On June 10th, the Harvard University Joint Center for Housing Studies released their annual “State of the Nation’s Housing 2011” report.  The headings in the executive summary tell the story:  “The Rocky Road To Recovery,” “Uncertainty in the Homeowner Market,” “Rental Rebound,” and “Affordability Problems Creeping Up the Income Scale.”

The Harvard studies includes lots of demographics–all of which are negative indicators for the homeowner market, which has declined 2% in the last seven years.  Immigration is lower, family formation is lower, utility costs are eliminating some potential home buyers, income is lagging.  Cheerful stuff. http://www.jchs.harvard.edu/publications/markets/son2011/index.htm

And then there’s the news from Long & Foster.  The Philadelphia Region, headed by Vice President Art Herling, a Blazing Systems client, reported a 12% increase in unit sales in May compared to last year.

“Quite a few of our offices have experienced not only an increase in units this May, but also their sales volume jumped as compared to May 2010.” Herling went on to cite rises in prices in April and May, as a positive sign of recovery.

“Since the year 2000, the median price of a home in the Philadelphia metropolitan area has risen 70%, and has dropped only 7% from the peak year of 2007,” added Art.

Long & Foster attributed some of their success to the use of technology.  (Long & Foster news release, 06/10/11).  Art Herling’s website, http://www.phlfp.com/, designed, developed, and hosted by Blazing Systems, features the company’s leading map search IDX system for lead generation, and a quick search and rotating featured properties on the Home Page.

Effective use of technology can provide competitive advantage, even in the most extreme of market conditions.

Pirates and Privates…It seems we are hearing more and viagr a pfizer more about these subjects lately.  From famous people taking & sending pictures of themselves, to teachers writing about how bad the students and parents are, to bullying campaigns on Facebook, to Wikileaks and actual bandit pirates on the high seas…

Texts are written, pictures are sent, videos go viral…The ability to publish is now firmly in the hands of anyone with a cell phone…

It’s not that it’s new…Even pre-Internet, content and images were being recorded and archived…Recent events reminded me of an incident that happened over 30 years ago…It seems that one employee, a male, had a “crush” on a female employee.  He left various anonymous notes in her desk over the course of 3 weeks, and then left a picture of himself, taken with a Xerox machine.  As it turns out, she was not so impressed by his picture, and the local sex crimes unit was able to match the handwriting on his job application to the notes.

What’s new is how easy it is.  That guy had to go to  a lot of trouble to get a good shot of himself on the Xerox machine.  Now, one click anywhere.  And it’s so easy to send…no making copies or addressing envelopes…just hit send and away it goes…Away it went…Sometimes not enough time spent thinking with the big head before hitting the send button…

So, by now everyone must understand that all of their texts, emails, photos, posts, contacts, google searches, and purchases, are recorded, and archived, forever.

We advise our clients to consider email as public, rather than private, communication.  If you wouldn’t want to see it on a billboard, then don’t send it. 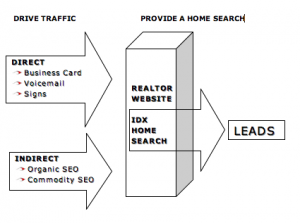 About 90% of the prospective home buyers are searching for homes on the Internet.  Looking for homes is by far the leading reason why buyers go to realtor websites.  To capture share in this competitive market requires a simple two-step approach.

STEP #1:  Provide an easy-to-use IDX search of the homes available in the local MLS.  This satisfies the vistor’s need to look for available properties, and it captures the lead for the website.  The website realtor is able to get leads on all the properties in the MLS, not just their own listings.

STEP #2:  Drive traffic to the site.  A common error is to build a site, and then wait for the world to beat a path to your door.  About 50% of the traffic to your site will come through direct channels.  Individuals will type in your URL to go to your site.  The other half will find you through search engines.  You can achieve long-term results with Organic SEO programs and immediate results with PPC (Pay Per Click) Commodity SEO programs.