Blazing Systems is an Open Source development  company. We use tools such as PHP, Python,SQL, and Javascript, to build applications  and websites for our customers.

In the early stages of the industry, and continuing still today, some software providers were closed, and proprietary. This was –and is–primarily a method to exert and maintain account control, by making customers dependent upon the software company . If you have an Open Source website, you can make changes to it yourself with a web editor program.

Today, there are some website providers who still control accounts by forcing customers to come to them to perform any changes or updates to the site.  They use proprietary Content Management Systems (CMS) to control access to the site .  This way, they get to charge fees to clients who need to make any changes. Given the fast pace of business these days, most organizations need to relatively frequently update their sites.  If they have a closed site, making changes becomes very expensive and time-consuming.

Organizations that are being victimized by closed, proprietary websites can save money and increase the effectiveness of their web sites by switching to Open Source technology.  While it may seem difficult to walk away from a site into which money has been invested, the future savings available and the advantage of controlling your own destiny make the change worthwhile–the sooner, the better, in fact.  You deserve to work with a technology partner that values your interest, rather than seeks to trap and control you.

President Obama has decided to “fix ” the college loan mess..  What do homes, hospitals, and colleges have in common?  The government has been getting involved, trying to “fix”them. Our system is set up for organizations–both for-profit and non-profit–to provide goods and services in exchange for money.  The costs of college and hospital (and housing) have become so onerous that no individual citizens can afford to pay them, so insurance companies have become the real “customers” of health care providers, and various banks and the federal gov’t have become the paying customers of higher education (and housing).   When there  is a disconnect between the provider and the receiver of the goods and services, the economics become distorted and unreal.

Colleges and universities and hospitals also share other characteristics, most of which serve to drive up costs:  Both higher ed institutions and health care institutions are bureaucracies, managed by highly educated people who tend to believe they are on a mission–a “higher calling”than us mere mortals who toil in mundane jobs.  In academia, tenure protects even the most ineffective practicioners, folks tend to seek to avoid taking on responsibility, and much time is spent on inter-departmental spats and CYA.  Medical institution bureaucracies are also marked by departmentalism and ‘It’s not my job’ kind of stuff.

Many people–myself included–have benefited from the services of both types of institutions.  Perhaps that is why costs have been allowed to spiral in such an out-of –control fashion.We need the benefits more than we need to be able to afford them.Until that changes, and the providers are more accountable to customers who have to pay their bills , the government will continue to have to intercede to cover the costs.

The CLOUD has captured the attention of the IT industry.  The CEOs of Oracle and Salesforce,com are having an all-too-public spat over who is more purely a Cloud Company, and traditional equipment manufacturers are scrambling to replace enduser sales lost to the cloud. Misunderstanding and misconceptions abound…  Business as usual, in other words, for what used to be called the computer industry.  In the good old days, hardware product companies made luxuriuous margins on selling and leasing processors and peripherals to endusers.  The model was that each enduser needed to own the means of production for its data processing requirements.  Large endusers created huge data centers with staffs of programmers and operators.  Product companies were happy to sell them the equipment they needed to do their own data processing.  Very large endusers became very profitable legacy accounts for companies like IBM, DEC.Compaq, H-P, and Dell. The problem with this model for the endusers  was the cost of all that hardware, software, and staff.  Endusers began to realize that doing your own data processing in the basement was not cost-effective, and they started to demand  a more effective model.  The IT industry has never changed on its own—Change has always been driven by customer demand, including especially the Open Systems movement led by Sun in the 80s and 90s. With hardware and software freed from proprietary constraints, customers could now begin receiving “computing on demand,”and IT companies raced to develop the best model to provide computing “by the drink.”  IBM developed “Grid Computing, “and others followed suit.  The breakthrough to “Cloud Computing”  was made possible by the acceptance in all customer segments  of the Internet as a trusted medium.  (Remember–not too long ago  , we were still debating if customers would actually be willing to trust the Internet to do commercial transactions.)

Now, endusers don’t need anything more sophisticated than what Scott McNealy originally called a “network computer, ” a device just to access software that was running somewhere else.  (These used to be called “dumb terminals.”)

In the Cloud, Everything’s A Service
Now, all the processing AND storage can be done by an entity other than the end user.  All the hardware,software, and staff needed to keep it running, can be owned and operated by someone else; and endusers can be free  to use the infrastructructure and/or apllications and platforms they need, when–and only when– they need them. Everything can nowbe consumed by endusers as a service.  We have IaaS, SaaS, and
PaaS in the Cloud(Infrastructure as a service, Software as a Service, and Platform as a Service).

ServiceLevel Agreements (SLAs)need to be developed to define service delivery from the Cloud,,  If not controlled by SLAs, endusers will have difficulty measuring services provided and establishing accountability. Pricing will be murky.If Cloud services are hard to measure and account for, then endusers may be forced to reverse course and begin to hire talent and buy products again, an outcome that some IT products companies would welcome. 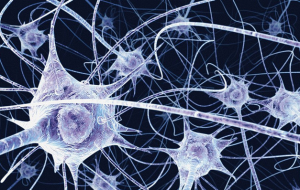 All the texts on the subject sing the praises of the wonderful brain and how it works.  For example,here’s  an excerpt from Living with Stroke, by RichardC. Senelick, MD:  “The brain is bursting with energy.  It consists of billions of nerve cells called neurons.  Despite its lumpy appearance, the brain is very active and very well organized –and in touch with all its “employees.”

–Nothing happens until they say so.  You don’t blink, or scratch, or wave, without the brain cells responsible for blinking, scratching , and waving , saying so.  Specific instruction has to come from the brain cells, or nothing will happen. There is no auto pilot or default.

Brain cells, like vampires, have an insatiable appetite for rich, red blood. They need the oxygen and nutrients that come with blood pumped fresh from the lungs.They use about 20″% of the total blood supply in the body.  If something interrupts the supply of fresh blood to these brain cells–which is what happens during a stroke—they just stop sending any electronic messages, and then just give up and die!  ‘OH, boo-hoo, lunch is late,so let’s just paralyze his arm and leg,and then go dark forever.’  Not very effective behavior  for such high-powered , supposedly smart cells.     If this is how our best and brightest behave, it’s no wonder so many guys get themselves in trouble when they start listening to the cells in that other “brain.“

I’ve been hit hard–concussed–playing rugby; and I’ve been in serious car accidents.  I was in all cases aware that a major event was happening.  I braced for some pain, and it came.With stroke, I woke up, and it had happened.It was like an explosion went off in my head while I wasn’t looking, blowing away most of the furniture in the room, and blowing the windows out, but there was no noise,no big blast.  They say that denial is one of the typical symptoms of a right-side stroke, and I can see why. —Except for the damage, it’s hard to understand that something huge and devastating happened.Then, as you gradually learn what occurred, and you come to understand how serious and long-term a Traumatic Brain Injury (TBI) is, it floors you.  Goodbye, denial!

Most of the damage occurred for me while I was unconscious.  It started with a drfting off—the sensation of falling into an abyss–on the left side; and then I remember lying on the floor, flopping around like a fish on a dock, my left arm like a stubby flipper, unable to sit up.The effects are long-lasting, and they require ongoing work and therapy.  Progress, not perfection, is the goal each day.

IN an earlier post, “Organic v. Commodity Growth,” we mentioned how  organic growth creates jobs within the organiazation, while “growth ” by acquisition creates  horizontal pressure on jobs.  When genuine growth is created by new sales, the organization expands vertically.  Higher- level technical and management jobs are created.  This in turn creates promotional opportunities for current employees.

Promotions are a rare occurance in an individual’s career.  They are life-changing events, creating not only a nice salary increase, but also a whole new career ceiling.  Promotions create high levels of job satisfaction.  If we are achieving  significant real revenue growth–say,20%+–then we should be able to sustain a promotion rate of at least 10%.

An unfortunate tendency that has been around forever is that sometimes weaker managers will block promotion opportunities for a high-performing employee–because they selfishly do not want to lose the employee’s productivity.   Healthy organizations protect against this behavior.  Heathy organizations have consistently high promotion rates, created by effective HR management and genuine growth.

Promotion rate is a useful metric to measure the morale and motivation levels within a service organization.

ON JULY 17th I had a major stroke on the   right side, mid-brain.I lost use of my left hand and leg, and my cognitive skills were scrambled quite a bit.

So,my left hand just lays there..It won’t respond to the thoughts or instructions that my brain sends to it…. I look at it, trying to will it to move, I talk to it, urging it to move, to grasp, to make a fist.I talk to it, even though it has no way o f hearing me.   And then it occurred to me–We talk to lots of things that have no ears.  We talk to the television, to cars on the highway,to golf balls,to cue balls,our computer, and all sorts of inanimate objects.My conclusion is that we are, of course, talking primarily to ourselves all this time–either affirmingwhat we believe and/or hope, or venting frustration to the world’s big ear. We’re trying to be brave and be heard.

Recovering from a stroke takes all the bravery that you AND your loved ones have.Softness in your brain where things used to be sharp causes gaps in communicating  and perception.I was fortunate to spend some time in a great rehab facility, the Healthsouth Rehabilitation Hospital in Reading,PA, a place with lots of caring folks who know how recovery works.(www. healthsouthreading.com.)

The upside–the benefit– of the stroke is that it provides a great opportnity to evaluate, and to understand what is truly important in your life.   When a good chunk of who you are is taken away, you see what you were with new clarity.  Typing one-handed is slow, and it slows the thought process in writing, but I just read back over some of the comments that you have bee kind enough to send, and i’mgoing to keep at it.  Thanks.