Google co-founder,  Sergey Brin, was recently quoted extensively in an article in The Guardian   about keeping the Internet open.  He said he is “scared” because current conditions and the trends he sees in the future are endangering the freedom and openness of the ‘Net.  He says that he and Larry Page would not have been able to create Google in today’s environment, due to efforts by governments, the entertainment industry, and “walled gardens, “like Facebook and Apple, to control content .   The warning that he could not have developed Google in today’s environment   is perhaps a bit of hubris from Google’s view of the rest of us.  He is making an argument, trying to convince the reader/listener of a point—that governments and others are controlling content.    To make his point, he’s assuming that we hold Google in such high regard, that we are swayed to his side of the argument by the fear that  a Google-like entity will no longer be possible …

He over-estimates the affinity for Google…..Too bad, Sergey, you wouldn’t be able to make a billion bucks…so sad!    He also seems to under-estimate how the 800 million Facebook users feel about Facebook.  They feel that Facebook is theirs, and they probably take Google for granted. 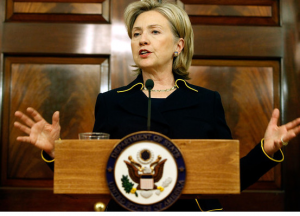 “We want to keep the internet open for the protester using social media to organise a march in Egypt,” Clinton said in a major policy speech last year. “[For] the college student emailing her family photos of her semester abroad; the lawyer in Vietnam blogging to expose corruption; the teenager in the US who is bullied and finds words of support online; for the small business owner in Kenya using mobile banking to manage her profits; the philosopher in China reading academic journals for her dissertation … internet freedom is about defending the space in which all these things occur.”

These are serious freedom-of-information and freedom-of-speech issues, as opposed to dire predictions and absolute judgements against entities trying to control content on the Internet by the organization whose goal it is to “crawl ” and control all the information on the Internet.  But in recent years Google has not seemed satisfied with acessing and aggregating all the content, they have seemed to be going through an identity crisis.  With Google Apps f0r word processing and spreadsheets, they seemed to want to be Microsoft.With Google Plus, they now seem to want to be Facebook.   They crushed the search engine market, missed the social media market, and are trying play in the app market. ‘Stick to your knitting ‘ is an old strategic planning concept that may apply here.

Keeping the Internet open is important, but we have to remember that we in the US have many decades of experience managing and protecting free speech ( tricky issues, like do the Nazis get to be in the parade in Chicago). The rest of the world needs our help in managing a completely free Internet.  There’s lots of work to be done there….No time for throwing stones at  and raising fears about “walled gardens.”

Google is a great search tool. We all use it, and depend on it more than we perhaps realize.  Let’s hope they thrive and continuously improve, and that the Internet remains free of control by governments….and giant media/entertainment conglomerates.